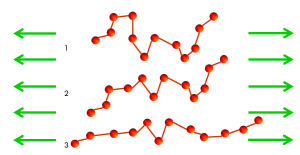 Rotation of the Kuhn segments allow for large deformations in the polymer molecule. However, the position of each molecule relative to others does not change. Due to this, a polymer deformed by a force will regain its original shape when heated close to the glass transition temperature.

Due to the wriggling motions of all the rotation Kuhn segments the entire polymer molecule may shift its position a little bit. The surrounding molecules will limit this shift to a displacement along the axis of the molecule. Other displacements are not possible. The polymer molecule moves as a snake along its axis through the other molecules. This way of motion is called reptation.

The reptation of the polymer molecules can be visualized by means of a pile of worms that move through each other:

Compared to rotation reptation is a relatively slow process. Due to the random nature of the rotations that counteract each other a single shift over the length of one Kuhn segment may take very many rotations.