Now suppose that the cube is made from a fluid like water or molten polymer. If a shear stress would be applied to this cube, then the top of the cube would continuously move in the direction of the stress with a certain velocity as long as the force exists. This continuous deformation is called shear rate and it is defined as the velocity of the top divided by the height.

The viscosity is an important material property of a fluid. With the aid of the viscosity the shear stress can be calculated when the fluid is sheared. Eventually this gives us the possibility to calculate the required pressure to move a fluid through a channel.

1.1     How to calculate the viscosity from the differential equation

This differential equation can be used for the calculation of the viscosity from the material properties. The rubber stress is the same as the shear stress. We assume that after some time of shearing the shear stress has become constant. We have a dynamic equilibrium. That means that the change of stress has become zero:
0 = + [change of rubber stress due to deformation per unit time] – [shear stress] / [rubber relaxation time]

This can be rewritten into:
[shear stress] = [shear modulus] * [relaxation time] * [shear rate]

Remember that the viscosity has been defined as:
[viscosity] = [shear stress] / [shear rate]

Which gives us the following result for the viscosity:
[viscosity] = [shear modulus] * [relaxation time]

By using a differential equation in a dynamic equilibrium, we have proven that the viscosity of a fluid is simply the shear modulus time the relaxation time. Since the relaxation time of a polymer strongly reduces with the applied stress it follows that the viscosity of a polymer will also decrease with increasing shear stress or shear rate. This is a commonly observed phenomenon with polymers as shown in the figure below. 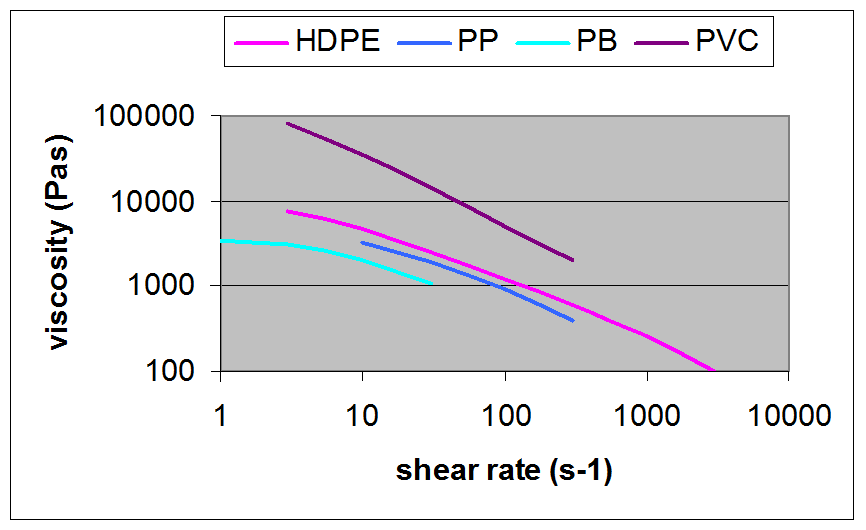